Call Us Email Us 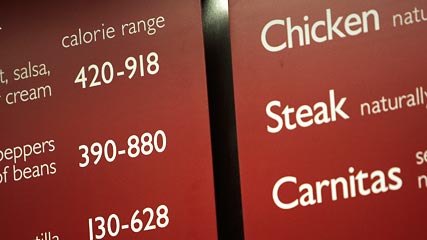 Nutritional labeling on menus will be coming to chain restaurants and vending machines near you! That’s right, menu labeling is going national, thanks to the passing of the health-care bill.

Included in the more than 2,000 pages of the legislation is Section 2572, which mandates that chain restaurants with 20 or more locations will have to display nutritional and calorie information.

Menu labeling is already being put into place in restaurants in New York City, California and several other states. Recently the beverage trade association pledged to put calorie counts on the front of soda containers, soda fountains and vending machines.

The concept hasn’t been warmly received by some food retailers in the past and the National Restaurant Association issued a general statement yesterday about its concerns with the passage of the health-care bill, but some advocacy groups are celebrating.

“Congress is giving Americans easy access to the most critical piece of nutrition information they need when eating out,” said Margo Wootan, nutrition policy director for the Center for Science in the Public Interest, a health-advocacy group, in a statement. “While it’s a huge victory for consumers, it’s just one of dozens of things we will need to do to reduce rates of obesity and diet-related disease in this country.”

Update: The National Restaurant Association just put out a statement praising the menu-labeling provision. “This legislation will replace a growing patchwork of varying state and local regulations with one consistent national standard that helps consumers make choices that are best for themselves and their families,” said Dawn Sweeney, president and CEO of the trade association, in the statement.

When we help customers focus on efficiency, w

What are Casual Dining Restaurants doing to Attract more Customers?

HOLIDAY GIFT CARD PROMOTIONS, HOW ARE THEY WORKING FOR YOU?

The 2010 predictions for the Hottest Trends f

As Restaurant owners and managers, we hear al